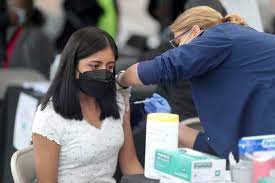 (Reuters) – New cases of COVID-19 in the United States rose 5% to more than 394,000 last week, the first increase after declining for nine straight weeks, according to a Reuters analysis of state, county and CDC data.

Thirty out of 50 states reported more new infections in the week ended March 21 compared with the previous seven days, up from 19 states in the prior week, according to the Reuters analysis.

Nationally, the weekly number of new cases had been on a downward trend since January, though health authorities have warned that infections could surge again if Americans relaxed social distancing restrictions too quickly. More infectious variants have also spread across the country.

“I am worried that if we don’t take the right actions now we will have another avoidable surge just as we are seeing in Europe right now and just as we are so aggressively scaling up vaccinations,” said Dr. Rochelle Walensky, director of the Centers for Disease Control and Prevention, on Monday.

The Northeast logged some of the highest rates of infection per capita, led by New Jersey, New York and Rhode Island.

Deaths from COVID fell 15% to 7,793 last week, or about 1,100 per day, according to the Reuters analysis. Health officials hope the country’s vaccination effort can prevent a rise in deaths even if cases surge again.

For a fourth week, daily average vaccinations set a record, with 2.5 million shots given per day last week. As of Sunday, 25% of the U.S. population has received at least one dose of a vaccine, up from 21% a week ago, according to the Centers for Disease Control and Prevention. About 13% has received two doses, up from 11%.

The average number of COVID-19 patients in U.S. hospitals fell 6% to 36,000, the lowest since October, according to a Reuters tally.Hospitalizations have fallen for 10 weeks nationally, but they are rising in 18 states, up from four states the previous week.