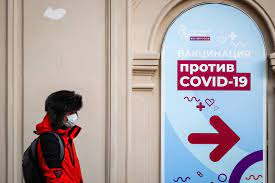 MOSCOW, June 16 (Reuters) – Moscow city authorities ordered all workers with public facing roles to be vaccinated against COVID-19, one of the most forceful steps taken anywhere in the world to compel employees to get shots.

A decree on Wednesday listed a range of jobs – from hairdressers, retailers and taxi drivers to bank tellers, teachers and performers – for which vaccination will now be obligatory. Deputy Mayor Anastasia Rakova said the list covers more than 2 million workers in the Russian capital.

Companies were given a month to ensureat least 60% of staff had received first doses, or face fines or temporary closure.

At least one provincial region, the Kuzbass in Siberia, issued a similar order, which said “certain categories of citizens” would be required to get shots, and state agencies as well as businesses must vaccinate 60% of staff by mid-July.

Russia has been offering vaccines to the public since last year, but has so far seen low uptake and is now seeing a major new surge of infections, with the capital hardest hit.

“More than 12,000 people are in hospitals with varying degrees of severity. In terms of morbidity, we are already at the level of last year’s peak,” Moscow Mayor Sergei Sobyanin wrote on Wednesday on his personal blog.

Rakova, the deputy mayor, said there had been a more than 70% increase in hospital admissions during the past week, and Moscow could run out of beds to treat coronavirus patients in 2-3 weeks, according to Interfax news agency.

Countries around the world have been struggling to battle vaccine hesitancy. But most have stopped short of requiring vaccines, except in limited cases.

The Kremlin has expressed dismay at the slow rate of vaccinations in Russia. President Vladimir Putin said on Saturday that only 18 million of Russia’s 144 million people had been vaccinated. Moscow has been exporting doses of its Sputnik V vaccine, even as most Russians have declined to get the shot.

TASS news agency quoted a Moscow city official, Yevgeny Danchikov, as saying companies that fail to meet the requirement to vaccinate staff could be punished by fines of up to 1 million roubles ($14,000) for repeat offences. Firms could also be shut down for up to 90 days.

Moscow accounted for 5,782 of Russia’s 13,397 new COVID-19 cases on Wednesday. There were 75 deaths in the capital from coronavirus-linked causes in the past 24 hours.

Sobyanin said on Saturday Moscow was repurposing thousands of hospital beds for an influx of COVID-19 patients and told residents to stay off work this week to help curb the spread.

Several regions tightened coronavirus restrictions on Tuesday as authorities reported Russia’s largest one-day case tally since February. Over the weekend, St Petersburg, which is hosting matches in the Euro 2020 soccer finals, and Moscow said they were imposing new curbs.