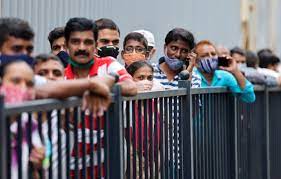 NEW DELHI, Aug 27 (Reuters) – India administered more than 10 million COVID-19 vaccine doses on Friday, a national record that Prime Minister Narendra Modi hailed as a “momentous feat” for the country ahead of fears of another surge in infections.

India has now administered about 628 million vaccine doses in total, giving at least one dose to more than half of its 944 million adults and the required two doses to 15%. The government wants the entire adult population covered by December.

The previous daily record was 9.2 million.

India’s vaccine production has jumped this month, thanks mainly to the Serum Institute of India that is now making about 150 million doses a month of its version of the AstraZeneca (AZN.L) vaccine.

The sharp rise in vaccinations came as India reported more than 40,000 new infections for a second consecutive day on Friday.

Cases had fallen to a five-month-low of 25,166 in the middle of the month but have risen sharply in the last three days, mainly in the southern state of Kerala which recently held a large festival during which families typically come together.

Kerala has accounted for nearly 60% of the new coronavirus cases in the past week and more than half of the total active cases, followed by 16% in the western state of Maharashtra.

“Any laxity in ensuring a strict adherence to the five-fold strategy of test-track-treat-vaccinate and ensuring COVID appropriate behaviour, may result in a further surge in COVID-19 transmission in Kerala and its neighbouring states,” the health ministry told the Kerala state government in a letter shared with journalists.

Kerala said it would impose a lockdown on Sundays until further orders.