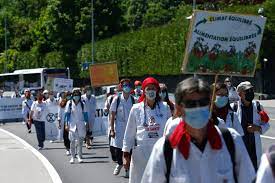 Medics march to WHO headquarters in climate campaign

Medics concerned about the effects on public health of environmental degradation marched on the World Health Organization (WHO) in Geneva on Saturday, demanding health authorities make climate change and biodiversity loss their top priorities.

White-clad activists from the group Doctors For Extinction Rebellion marched from Geneva’s Place des Nations to WHO headquarters where they were met by Director-General Tedros Adhanom Ghebreysus, and Maria Neira, director of environment, climate change and health.

“The pandemic will end, but there is no vaccine for climate change,” Tedros said as he welcomed the activists outside the building. “We have to act now, in solidarity, to prevent and prepare before it is too late.”

Professor Valerie D’Acremont, an infectious disease specialist and co-founder of Doctors For Extinction Rebellion, called on the WHO “to be the driving force and guarantor of public policies that respect the health of all and preserve life.”

The activists handed Tedros a letter and a large hourglass, the symbol of Extinction Rebellion which wants to prompt a wider revolt to avert the worst scenarios of devastation outlined by scientists studying climate change.

Tedros later retweeted a message from the WHO stating both bodies were “standing in solidarity & urging global action” to end the climate crisis and protect health everywhere. “These are inextricably intertwined.”

Paris venue hosts indoor rock concert – with masks and virus tests
Is it all Greek to you? Coronavirus variants get new names