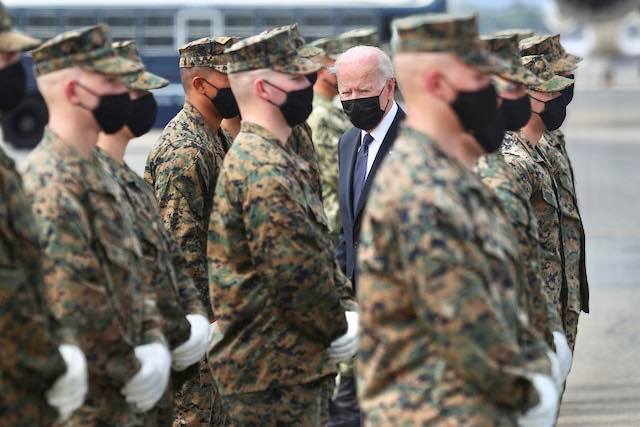 Marines on track for worst vaccination record in U.S. military

WASHINGTON, Nov 21 (Reuters) – The U.S. Marine Corps is set to have the worst vaccination record among military branches, with thousands of active-duty personnel set to miss the service’s Nov. 28 deadline to be fully inoculated.About 91% of active personnel are fully vaccinated and 94% partially vaccinated as of Wednesday, according to a Marine Corps statement on Sunday.Service members are considered fully vaccinated 14 days after getting a single Johnson & Johnson (JNJ.N) shot or 14 days after their second dose of Pfizer (PFE.N) or Moderna (MRNA.O) vaccine — meaning it is too late for many to complete the vaccination process by the deadline.The Navy has the highest vaccination rate at 96.7% of active-duty personnel fully vaccinated, followed by the Air Force at 96.4%. An Army spokesperson said 92% of active-duty soldiers were fully vaccinated. The Army deadline is Dec. 15 for active duty and June 30 for the National Guard.Army Secretary Christine Wormuth warned on Tuesday that soldiers, including National Guard members, who refuse to get vaccinated would not have their service renewed unless they have an approved exemption, according to a memo seen by Reuters.Her warnings come as Oklahoma Governor Kevin Stitt, a Republican, defied the federal mandate and said he would not require National Guard members in his state to get vaccinated.Other Republicans opposing vaccine mandates include Senator Ted Cruz who on Saturday responded to Wormuth’s memo by tweeting: “Biden admin persecuting our soldiers. This is not good for America.”In addition to the military, the Biden administration mandated vaccination for most federal employees, contractors, and health workers. More recently the White House said it would require private employers with at least 100 workers to mandate vaccination or weekly testing, a rule being challenged in court. Nearly 60% of Americans are fully vaccinated.