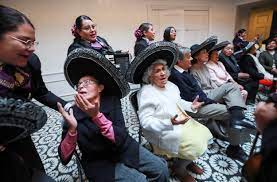 MEXICO CITY, Oct 16 (Reuters) – Mariachi bands have long been a staple of Mexican culture, and now their lively songs are finding a new use: reawakening the memories of people suffering from Alzheimer’s disease.

The Mexican Alzheimer’s Center is promoting the therapy, hoping the music will stir up recollections of times past among patients with the degenerative illness, encouraging them to sing or even dance to familiar old tunes.

“It makes me very sad, because I remember my husband, but apart from that, I listen to the music with joy because it brings back many memories that make me very happy,” said Leonor Camacho, a 90-year-old with Alzheimer’s in Mexico City.

Songs with links to her husband, relatives and friends are played to Camacho to complement her daily therapy, which includes saying tongue twisters with other patients online, and performing manual exercises to stimulate her memory.

The course of therapy led by female guitarists, violinists and trumpeters in cropped jackets and wide sombreros began in September and will continue until mid-November, encompassing performances throughout the city that patients can attend.

The shows take in ballrooms, boats on the waterways of the southern Xochimilco district and the capital’s traditional mariachi hotspot, the central square Plaza Garibaldi, in the hope that venues will fire up patients’ memories.

Regina Altena, head of the Alzheimer’s Center, said studies show that music stimulates neurotransmitters in the brain, creating a mental and emotional connection that help patients remember and conjure up significant events in their lives.

Originally developed in Germany 11 years ago, the therapy was given a mariachi twist to adapt it for Mexican use.

Camacho, who has had Alzheimer’s for five years, is one of an estimated 1.8 million people with dementia in Mexico. Of them around 1.3 million are thought to have Alzheimer’s.

During the afternoon, Camacho likes to peruse photo albums with her daughter Maria del Rocio Maya, and keeps her mind active by preparing food and doing other tasks around her home.

Since Camacho began the mariachi therapy, Maria del Rocio said her mother had become livelier, and taken up a more active role in family life again. Before, Camacho tended to sit alone in an armchair by the window, her daughter said.