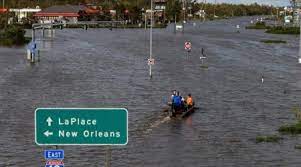 The weather disaster hit a state where hospitals are crowded with COVID patients, cases of the Delta variant were surging and nurses were in short supply.

Early assessments indicated that a handful of smaller hospitals have been forced to evacuate patients, while all major regional hospitals were doing fine for now, said Dr. Joseph Kanter, the top medical official in Louisiana.

“Outside of a few, small outlying hospitals, it doesn’t appear to be anything catastrophic,” said Kanter, who worked through the harrowing days of Hurricane Katrina in 2005 when some two dozen hospitals in New Orleans had to be evacuated.

Warner Thomas, the CEO of Ochsner Health, the largest healthcare provider in the state, said that two of its smaller hospitals southwest of New Orleans were being evacuated because of damage to roofs and flooding. That affected 65 patients at St. Anne Hospital and Leonard J. Chabert Medical Center.

Thomas said Ochsner was helping move about 100 patients from Terrebone General Medical Center in Houma, southwest of New Orleans, which is a partner hospital with Ochsner.

So far there were no reports of any injuries to patients or staff members because of Hurricane Ida, Thomas said.

All Ochsner hospitals in New Orleans suffered roof damage and are operating on generator power as electricity remains out, Thomas said. The facilities have a 10-day supply of fuel on site, with more on the way already. Nearly all of Louisiana was without power Monday.

Many hospitals were using their own water wells while they await the restoration of city water services, he said.

“The biggest challenge in the coming days is around our people,” Thomas said.

Doctors, nurses and other staff members have damage to their homes or no power. Ochsner is working on housing them in hotels and elsewhere. Louisiana was already facing a shortage of more than 6,000 nurses before the storm hit, so having more personnel out dealing with damage to their homes would put even more stress on the system, Thomas said.

Dr. Rebekah Gee, who until last year was the health secretary for Louisiana and now leads Louisiana State University’s healthcare services division, worried about where evacuated patients would go when wards are filled with COVID patients and how the spread of COVID would be impacted.

“This is a perfect petri dish condition for COVID to grow,” she said. “People are in close quarters, they aren’t going outside, and a lot of congregate sheltering is going to be starting.”