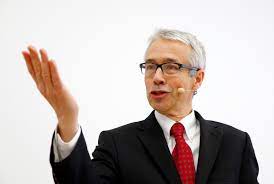 Aug 19 (Reuters) – Johnson & Johnson (JNJ.N) said on Thursday its Vice Chairman of Executive Committee Joaquin Duato will become chief executive officer from Jan. 3, replacing Alex Gorsky who has been at the helm for nine years.

During Gorsky’s tenure, he oversaw massive growth in J&J’s cancer business, established it as a major player in the rare disease market, and led its development of the first single shot COVID-19 vaccine.

But he was also at the helm during some of the biggest crises in the company’s history, including allegations its Baby Powder contained cancer-causing asbestos and litigation claiming it contributed to the U.S. opioid epidemic. read more

J&J also faced major setbacks in its COVID-19 vaccine rollout earlier this year, when quality problems at a Baltimore manufacturing facility wasted millions of doses and delayed its production. J&J said its market capitalization grew from nearly $180 billion to more than $470 billion under Gorsky and its share price increased over 170%.

Gorsky oversaw the growth of J&J’s cancer drug business from $2 billion in sales in 2011 to over $12 billion in 2020 thanks in large part to blockbusters such as blood cancer drugs Darzalex and Imbruvica.

Under his leadership, the healthcare conglomerate also acquired Actelion in a $30 billion deal, the largest in its history, to push into medicines for rare diseases.

J&J also made signficant breakthroughs in its vaccine programs beyond its COVID-19 shot, including innoculations against Ebola.

The drugmaker recently recalled certain spray sunscreen products after discovering some of them contained low levels of benzene, a carcinogen.

In 2019, it paid over $100 million to settle claims from states that it violated consumer protection laws by misrepresenting the safety and effectiveness of its transvaginal surgical mesh devices.

Gorsky said in a statement it was the right time for the transition for both the company and him personally as he focuses more on family due to “family health reasons.”

Gorsky will serve as the company’s executive chairman.

Duato, who has worked with J&J for more than 30 years, was also the chairman of the trade group Pharmaceutical Research and Manufacturers of America.

He will also be appointed as a member of the company’s board.