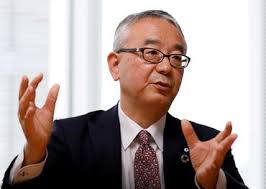 Shionogi & Co is planning clinical trials by year-end for what may be one of Japan’s first domestically produced COVID-19 vaccines to reach the market, as the globe races to secure enough doses to battle the pandemic.

The company plans to put its vaccine candidate into Phase 1 clinical trials in December and shift into Phase 2 by January and apply for tentative approval from the government, Shionogi chief executive Isao Teshirogi told Reuters in an interview.

But a Phase 3 trial would likely be done overseas due to the relative lack of COVID-19 cases in Japan, he said.

Shionogi’s plan to have enough doses to inoculate 30 million people by the end of next year means its impact will be much larger than that of first mover Osaka-based AnGes Inc, which expects to have its first doses ready by March.

While Shionogi lags global front runners that are now conducting mass final-stage clinical trials, it is betting on a proven platform to help it become Japan’s biggest home-grown COVID-19 vaccine producer. French drugmaker Sanofi SA and Novavax are using a similar process in their COVID-19 candidate.

“I think our recombinant protein vaccine, method wise, has more accumulated data on efficacy and safety than the novel methods,” Teshirogi said.

Newer methodologies like mRNA vaccines may end up being the solution, “but as of today, we don’t know anything”, he said.

Prime Minister Yoshihide Suga has pledged to provide enough vaccine for the populace by mid-2021, and Japan has struck deals for hundreds of millions of doses with companies including AstraZeneca Plc and Pfizer Inc.

Shionogi has received about $400 million from the Japanese government for its COVID-19 vaccine research.

But the world will need several different vaccines to fight the pandemic, given the sheer size of global demand, effects on different populations, and possible limits of effectiveness in the first vaccines.

Teshirogi said holding the postponed Tokyo Summer Olympics in 2021 is “still possible”, but it will depend more on high-rapid-diagnostic testing and logistics than vaccines.

“Receiving the vaccine is not a so-called safe license,” he said.