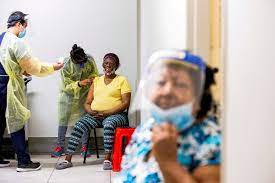 TRIESTE, Italy (Reuters) -Italy made COVID-19 health passes mandatory for all workers from Friday in a test case for Europe, with the measure being applied mostly peacefully across the country despite scattered protests.

Prime Minister Mario Draghi’s cabinet approved the rule – one of the world’s strictest anti-COVID measures – in September, making it obligatory from Oct. 15 for all workers either to show proof of vaccination, a negative test or recent recovery from infection.

Under the rule, effective until year-end, workers without the so-called Green Pass will be suspended without pay and face a fine of up to 1,500 euros ($1,730) if they try to work on regardless.

The largest demonstrations were at the major northeastern port of Trieste, where labour groups had threatened to block operations and around 6,000 protesters, some chanting and carrying flares, gathered outside the gates.

“The Green Pass is a bad thing, it is discrimination under the law. Nothing more. It’s not a health regulation, it’s just a political move to create division among people…,” said Fabio Bocin, a 59-year old port worker in Trieste.

Around 40% of Trieste’s port workers are not vaccinated, said Stefano Puzzer, a local trade union official, a far higher proportion than in the general Italian population.

Vaccine hostility is also higher in the city than in most of Italy, with an “anti-vax” party taking 4.5% of the vote at mayoral elections this month.

Regional governor Massimiliano Fedriga told SkyTG24: “The port (of Trieste) is functioning. Obviously there will be some difficulties and fewer people at work, but it’s functioning.”

In Genoa, Italy’s other main port, around 100 protesters blocked access to trucks, a Reuters witness said.

In Rome, police in riot gear stood by during a small rally where people shouted “No Green Pass”. Small protests also took place in Turin and Bologna.

In some towns pharmacies opened earlier than usual for people to get their swab.

Outside the Rinascente department store in central Rome small lines of sales assistants and shoppers formed as employees’ health certificates were checked by security staff.

“I think it’s a fair measure towards all those Italians who have tried to get out of this pandemic by getting vaccinated… I don’t see where the problem is,” said Rome resident Fabio Bonanno.

Some 15% of private and 8% of public sector workers have no Green Pass, an internal government document seen by Reuters estimates.

The government hoped making the Green Pass mandatory would convince unvaccinated Italians to change their minds, but with over 80% over the age of 12 already fully inoculated and infection rates low, that surge has not materialised.

The rightist League and Brothers of Italy parties and some unions say that, to address the risk of staff shortages, the validity of COVID tests should be extended from 48 to 72 hours, and they should be made free for unvaccinated workers.

But the government has so far resisted those calls. The centre-left Democratic Party, which is part of Draghi’s ruling coalition, says that making swabs free would be the equivalent of an amnesty for tax dodgers.

However, some firms are offering free swabs to their staff. Motorcycle maker Ducati for example, said it would give free COVID tests to all employees until Nov. 15.