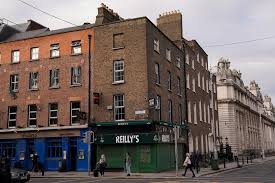 Ireland’s health chiefs recommended to the government on Sunday that the country enter a second nationwide lockdown for four weeks in a surprise move that cabinet will discuss on Monday, two government sources said. Ireland’s National Public Health Emergency Team recommended a leap to the highest level of COVID-19 restrictions, Level 5, from current Level 2 controls in 24 of Ireland’s 26 counties and stricter Level 3 measures in Dublin and Donegal. The government has almost entirely adopted their health chiefs’ advice throughout the pandemic, but one of the sources said a return to lockdown would have a serious economic and societal impact. Prime Minister Micheal Martin and the leaders of his two coalition partners will meet the country’s chief medical officer on Monday ahead of a cabinet meeting to discuss the recommendations. Under level 5, people are asked to stay at home, except to exercise within 5 kilometres, with only essential retailers allowed to stay open. Unlike the first lockdown, schools and crèches would not have to close. A spokesperson for the health department was not immediately available for comment on the advice. Like most of Europe, Ireland has seen a steady increase in infections since the end of July after emerging slowly from one of Europe’s most severe shutdowns. It reported the highest number of daily cases since late April on Saturday. However Ireland’s 14-day cumulative case total of 104.6 per 100,000 people represents only the 14th-highest infection rate out of 31 European countries monitored by the European Centre for Disease Control. Europe’s worst infection hotspot Spain has an infection rate three-times higher than Ireland and while it severely tightened confinement measures in hard-hit Madrid on Friday, restaurants, gyms and shops can still open at limited capacity. Ireland has a relatively low hospital bed capacity compared to other European countries. The number of hospitalised COVID-19 patients has risen steadily to 132, but peaked at 881 in April during the first lockdown.