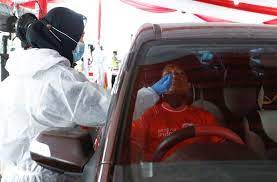 Indonesia seen at risk of COVID-19 ‘timebomb’ after Eid travel

Indonesia set up roadblocks on Monday to screen for COVID-19 among travellers returning from Muslim holidays, as fears rose that mass gatherings and virus variants could trigger a surge of new cases in the world’s fourth most populous nation.

Each year millions of Indonesians fan out across the sprawling archipelago after Ramadan to celebrate Eid al-Fitr and visit extended families, in a tradition known as “mudik”.

To try and avoid mass transmission of the virus, the authorities banned travel between May 6 and 17, during the Eid period, but government data suggests that at least 1.5 million people left their homes ahead of the ban.

On Monday, police were stopping cars at checkpoints around Jakarta in an attempt to identify and isolate positive cases. They were asking people about their travels, requesting to see test results and instructing some people to undergo tests.

“I don’t think these tests and roadblocks can hold down the infection numbers,” said returning traveller Trisna Hudaya, 59. “But maybe it can help to control and track.”

With more than 1.7 million confirmed cases and 48,000 deaths since the pandemic began, Indonesia has been the worst-hit country in Southeast Asia. However, it has not experienced a crisis as bad as that seen in India – although some health experts are concerned such a scenario is possible.

Low testing and contact tracing, and a positivity rate consistently above 10%, mean while case numbers have come off their worst levels in the country, Indonesia appears far from having COVID-19 under control.

Dicky Budiman, an epidemiologist from Australia’s Griffith University, warned of a coranavirus “timebomb” that any “superspreading or super-strain event” could trigger.

“So far Indonesia has had luck, but the luck will not last. I believe in one to three months ahead we will have a very serious situation,” he said.

The recent identification of potentially more transmissible virus variants, including eight cases of a variant first detected in India, are generating more concerns.

“The Indian tragedy … I hope it won’t happen, but if I say it won’t happen, that would be too naive, dishonest,” Health Minister Budi Gunadi Sadikin told a seminar on Monday. “I’m worried in some spots there will be a surge.”

In recent days memes comparing crowds at Ancol, a recreational beach area in Jakarta, and those at the Kumbh Mela festival that was partly blamed for India’s case surge, have circulated on social media.

Irma Hidayana, co-founder of Lapor-COVID-19, an independent coronavirus data initiative, criticised what she described as weak regulation over the Eid period.

“We are worried about seeing a significant increase in cases, but we haven’t seen it yet because over the past weekend most laboratories have been closed or their operations have been limited,” she said. “We should see it soon.”