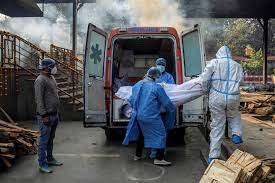 NEW DELHI (Reuters) – India reported 275 new COVID-19 deaths on Wednesday, the most this year, as a second surge in cases fills up hospital beds in big states such as Maharashtra.

Infections rose by 47,262 in the past 24 hours, the highest since early November, to a total of 11.7 million, data from the health ministry showed. India has recorded the most number of cases after the United States and Brazil.Total deaths have shot up to 160,441 in India.