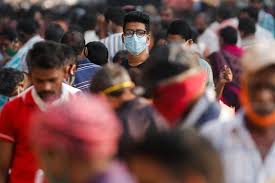 The world’s second most populous nation also has the second highest tally of infections after the United States, which has recorded 8.8 million.

Cases in India have dipped sharply from September’s peak, but experts warn the current festival season could bring another spike.

The death toll has been low relative to infections, with 517 new deaths in the last 24 hours carrying the total to 120,527, the ministry said.