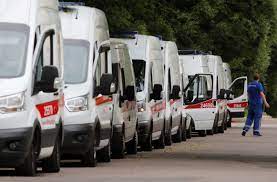 ST. PETERSBURG, Russia, July 1 (Reuters) – Doctors battling record numbers of COVID-19 deaths in St. Petersburg are watching with unease as soccer fans gather for the next Euro 2020 match to be played at one of its stadiums.

Russia’s second city, which reported more than 100 deaths per day this week, hosts the quarter-final between Spain and Switzerland on Friday. It is the city’s seventh Euro 2020 match.

Some pandemic restrictions have been imposed, including a 50% limit on stadium capacity and a requirement that fans wear masks. Restaurants must stay closed between 2 a.m. and 6 p.m. and there are caps on the number of people that can attend public events.

Coronavirus cases are still rising fast though, part of a wave across the country that authorities blame on the highly contagious Delta variant and low uptake of vaccines.

In the COVID-19 red zone of one city hospital, medical workers said they were aware of the risks.

“As a doctor I am of course against the holding of any mass events,” Alexei Dmitriev said, standing in full protective gear in the Mariinskaya hospital.

“Of course we expect a surge in patients after such mass events are held,” he said.

The World Health Organization said on Thursday the mixing of crowds in Euro 2020 host cities, travel and easing of social restrictions had driven up the number of new cases in Europe by 10%.UEFA said it was fully aligned with local health authorities’ guidelines at every venue and it strictly follows such measures.

In the hospital ward, patients lay on breathing support while doctors monitored their lung functions and prepared oxygen tanks.

Patients’ symptoms were different during this surge, compared to earlier coronavirus waves, Dmitriev said. People are suffering severe respiratory symptoms despite minor lung damage, and the age range is younger.

Another medical worker recalled the shock of completing a day’s work in the red zone and heading out into the city, where there were barely any restrictions at all.

“People were going around, hugging each other,” head nurse Alla Vitalyevna said. “For me it was like living two lives in St. Petersburg.”

“Probably there was a way to prevent what is happening now.”

Swiss Health Minister Alain Berset warned soccer fans that it would be foolhardy to travel to Russia without first having been vaccinated with a COVID-19 shot. More than 1,000 Swiss fans are expected to travel to St. Petersburg for Friday’s game.

Swiss Defence Minister Viola Amherd said on Wednesday she was going to the match but had been twice vaccinated and would take all the necessary precautions.

Part of the problem affecting the situation in St. Petersburg is Russia’s low vaccination rate.

The country has inoculated just 16% of its population since January, in part due to widespread distrust.

Sitting in the Mariinskaya hospital, patient Alexander Dyachenko said he was sceptical of new vaccines and had decided that, as a young and healthy man, he would rather risk COVID-19, expecting symptoms to be light.

“This did not come to pass. I fell sick, and I fell sick pretty badly,” Dyachenko said, sitting on a hospital bed, receiving injections from a doctor, and coughing occasionally.

“If I knew that my symptoms would be what they were, most likely I would have considered getting a vaccine,” he said.