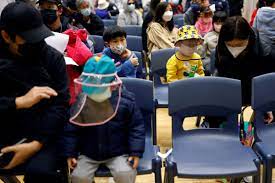 HONG KONG, Feb 26 (Reuters) – Hong Kong health authorities said on Saturday they would adjust COVID testing procedures to allow some people to test from home to ease long queues at designated testing centers, as the city’s outbreak proves increasingly hard to control.Health secretary Sophia Chan said a record 17,063 new COVID-19 daily cases had been recorded, and 66 deaths in the past 24-hours in the city of 7.4 million.”We’re in a very dire situation,” she told reporters.”The scale of the outbreak is unprecedented and the peak is yet to arrive,” she added, with some experts predicting up to 180,000 cases daily in March.Chan said some 1.3 million rapid testing kits would be handed out to those in higher risk areas and jobs, and people testing positive would have to register their results online.Authorities also said they would allow some children testing positive for COVID-19 to remain at home, rather than being separated from their parents and hospitalised, after a public outcry from families across the city.Some Hong Kong families had despaired over strict COVID rules that saw even toddlers in some cases taken away from their parents and isolated, prompting some families to leave the city. The rapid testing kits will “remove long queues and be speedier,” said Chan, in an adjustment of the city’s COVID policies after criticism from some epidemiologists that such queues actually increased the risk of transmission.The outbreak of the Omicron variant has inundated the financial hub’s public health system, and triggered a raft of measures including the construction of new isolation and treatment units as authorities strive to maintain a “zero-COVID” policy in line with mainland China.Authorities will also carry out better “triaging” of patients, so that the most sick and needy, including the elderly, would be prioritised at hospitals that have been forced to place some patients on beds outside accident and emergency departments.Patients who are in a stable condition would be discharged earlier to free up more hospital beds, and some children allowed to stay at home if only showing mild symptoms.”If there is medical need for hospitalisation, they will be arranged to receive treatment and care in the paediatric isolation facilities in public hospitals,” the Hospital Authority said in a response to Reuters.Meanwhile, concerns have grown for a spread in nursing homes for the elderly, with more than 400, over half of such facilities in Hong Kong, now battling outbreaks. The rate of vaccinations among Hong Kong’s elderly has been relatively low, and many suffer from chronic illnesses.Hong Kong’s outbreak presents potential political risks in a sensitive year for Chinese President Xi Jinping, who is hoping to secure an unprecedented third term of office in the autumn.He recently commented publicly on the need for the Hong Kong government to bring the outbreak under control. Chinese health officials on Friday reported the highest daily count of COVID cases arriving from outside the mainland in nearly two years, with dozens of the more than 250 or more new infections coming from Hong Kong.