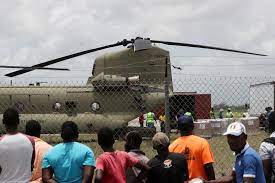 LES CAYES, Haiti (Reuters) -A hungry crowd gathered outside an airport in southern Haiti on Wednesday as victims of an earthquake that killed some 2,000 people voiced anger that government aid was slow to arrive five days after the disaster, leaving many without food and water.

Prime Minister Ariel Henry, who flew to visit the worst-affected city of Les Cayes in southwest Haiti soon after Saturday’s magnitude 7.2 quake, had praised the dignity shown by survivors and promised a rapid escalation of aid.

But following another night of rains, residents in Les Cayes, including those camped in a mushrooming tent city in the city center, complained of scant help on the ground.

Concern was also growing for more remote places outside Les Cayes such as the badly-hit town of Jeremie to the northwest, where access roads were damaged, video shared on social media showed.

Pierre Cenel, a local judge in Les Cayes, a city of some 100,000 inhabitants, rebuked the government in Port-au-Prince, echoing bubbling frustration in the hardest-hit regions.

“As a judge, I must not have a political opinion. But as a man, as a man concerned about the situation of my country, nothing is working. They didn’t do anything to prepare for this disaster,” Cenel said in downtown Les Cayes.

The poorest country in the Americas, Haiti is still recovering from a 2010 quake that killed over 200,000. The latest calamity hit just weeks after President Jovenel Moise was assassinated on July 7, plunging Haiti into political turmoil.

Jerry Chandler, head of Haiti’s civil protection agency, told a news conference he knew aid had yet to reach many areas but officials were working hard to deliver it.

There were at least 600,000 people in need of humanitarian assistance and 135,000 families displaced, Chandler said, noting the goal was to deliver aid to everyone in need within a week.

To avoid what it said was a confused response to the 2010 quake, Haiti’s government has sent a list of humanitarian needs to partners and is sorting the international aid as it arrives to distribute it to the most needy, Chandler said.

Latin American countries such as Chile, Colombia, the Dominican Republic, Mexico, Panama and Venezuela have also sent food, medicine and supplies, and Taiwan – which has diplomatic relations with Haiti – also swiftly dispatched aid. Puerto Rican authorities said they were sending more rescue workers and doctors who were expected to arrive on Wednesday.

In the fast-expanding tent city in Les Cayes, displaced residents were getting worried.

“We need help,” said Roosevelt Milford, a pastor speaking on radio on behalf of the hundreds camping out in soggy fields since the quake destroyed their homes.

Aid workers have warned about the risks of waterborne diseases, such as cholera.

Milford and others complained they lacked even the most basic provisions, such as food, clean drinking water, and shelter from the rain. Tanks of drinking water were destroyed during the quake, impacting reserves, authorities said.

Tropical Storm Grace, which sloughed across southern Haiti this week, swept away many shelters and inundated the field.

Moril Jeudy, a community leader in Marigot, south of Port-au-Prince, said while the town had emerged intact from the quake, Grace had flooded hundreds of homes, killed four people and left several more missing. And no help had arrived yet.

“Even the NGOs didn’t come,” he said.

In a country with widespread violent crime, residents set up their own security teams to keep watch at night, Milford said.

Security concerns about gang-controlled areas on the route from the capital Port-au-Prince, slowed aid access.

The U.N. Office for the Coordination of Humanitarian Affairs said negotiations with armed groups had permitted a humanitarian convoy to reach Les Cayes.

Chandler said the government was escalating the number of aid convoys going by land, and aimed to reach three a day soon.

However, he said flash flooding and landslides caused by Grace had made remote communities harder to reach.

In L’Asile, a town of over 30,000 people 60 km (40 miles) northeast of Les Cayes, community leader Aldorf Hilaire said government help had yet to arrive, and survivors were relying on support from charities such as Doctors Without Borders.

“We are desperate,” he told Reuters. “The springs are dirty: the water is not drinkable … We had a bad night during the storm and the people need tents and tarps.”

Authorities have said the earthquake killed at least 1,941 people and injured some 9,900 others, but with rescuers still pulling bodies from the rubble the tally looks set to rise.

In a rare piece of good news, 34 people had been rescued in the last two days, Chandler said. Still, as time passes, hopes for survivors wane. It was difficult to carry out search and rescue operations due to landslides in some areas, he added.

Quake damage has hampered the work of several major hospitals. Doctors in makeshift tents have battled to save the injured, from young children to the elderly.

Dozens in the Les Cayes tent city were from the nearby poor neighborhood of Impasse Filadelfia, where crumbling cement homes, contorted tin roofs and soaked mattresses lined narrow dirt roads.

Water surged into the modest homes after a fast-moving river that edges the neighborhood burst its banks during the quake.

“We are crying out for help,” said one of them, Claudel Ledan. “All our houses collapsed and we need help from the government urgently.”