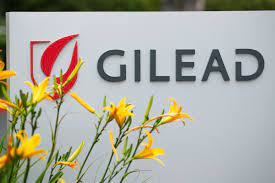 Aug 2 (Reuters) – Gilead Sciences Inc (GILD.O) on Tuesday said its second-quarter adjusted profit fell due to higher research and royalty costs as well as a downturn in sales of its COVID-19 antiviral drug Veklury.Quarterly revenue, however, rose 1% to $6.3 billion, which was ahead of the average Wall Street estimate of $5.85 billion, according to Refinitiv data.The biotech company said adjusted quarterly profit fell 13% to $1.58 per share, which also topped the average analyst estimate of $1.52. Net income fell to 91 cents per share from $1.21 per share.Sales of COVID-19 treatment remdesivir, which is sold under the brand name Veklury, fell 46% to $445 million, but still came in ahead of analysts’ estimates of $390 million.”Sales declined as hospitalization rates declined in most geographies,” Gilead Chief Commercial Officer Johanna Mercier said on a conference call, adding the company remains ready to supply Veklury if needed.Cancer drug Trodelvy – shown in a recent trial to modestly delay tumor growth in women with the most common form of breast cancer – saw sales rise 79% to $159 million. Sales of Gilead’s cancer cell therapies rose by a robust 68% to $368 million.HIV drug sales, driven by demand for higher-priced products, rose 7% to $4.2 billion.Gilead announced that the U.S. Food and Drug Administration will decide by Dec. 27 whether to approve its long-acting HIV medication lenacapavir.”We’ve seen somewhat of a recovery in core products from last quarter’s weaker results,” BMO Capital Markets analyst Evan Seigerman said in a research note. He pointed to particular strength in HIV and cell therapy products.For full-year 2022, California-based Gilead sightly raised its forecast for adjusted earnings per share to between $6.35 to $6.75 from a previous view of $6.20 to $6.70. Gilead said it now expects product sales of $24.5 billion to $25 billion, up from a prior estimate of $23.8 billion to $24.3 billion.Gilead were up 1% at $60.15 in after hours trading.