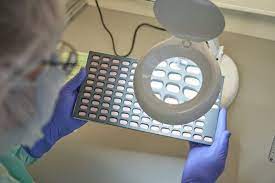 FRANKFURT (Reuters) – Germany’s health minister said on Sunday he will push for more prescriptions of Pfizer’s oral COVID-19 antiviral treatment Paxlovid by family doctors to reduce severe cases of the disease.”A system involving family doctors will be prepared to administer this far too rarely-used COVID life saver more routinely,” he wrote here on Twitter on Sunday, adding that sufficient stockpiles were available.The pill, which won conditional European marketing approval in January, is given to infected people who are at high risk of progression to severe illness.In his tweet, Lauterbach mentioned trial results that the oral treatment course can cut the risk of hospitalisation in the elderly by 90%, when taken early after infection.Pfizer said on Thursday it is seeking full U.S. approval for Paxlovid, which is currently available under an emergency use authorization there.Deaths and intensive care treatments after COVID infections have been on the rise again in Germany since late June, driven by more infectious subvariants of Omicron, after falling steadily for about three months.The drug was not found to ease symptoms among younger adults.German chancellor Olaf Scholz, a member of centre-left SPD like Lauterbach, on Sunday said schools and non-essential businesses would not be shut again if infection rates rose significantly this year, but that face masks would play a bigger role.