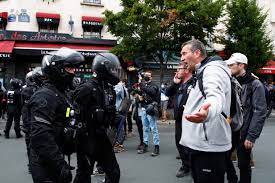 The health ministry reported 10,908 new cases on Friday, taking the total to more than 5.84 million. The daily new case tally was last over 10,000 at the end of May.

The seven-day moving average of new cases rose further to 5,795, after jumping over the key threshold of 5,000 on Wednesday.

The closely watched metric – which smoothes out daily reporting irregularities – had risen as high as 42,000 per day in mid-April and fallen back to less than 2,000 per day in late June.

But since then, week-on-week percentage increases in new cases have risen every day, from more than 50% last week to more than 100% on Wednesday and nearly 140% on Friday. On Thursday, the number of reported cases fell following the July 14 national holiday.

Hospital numbers for COVID-19 continued their weeks-long fall, but the rate of decline slowed further. The number of COVID-19 patients in hospital fell below 7,000 for the first time since early October and the number of people in intensive care with the disease fell below 900.The ministry also reported 22 new deaths from COVID-19, taking the total to 111,451.