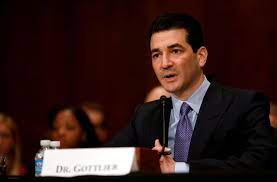 CHICAGO, Oct 4 (Reuters) – The summer spike in cases fueled by the Delta variant of the coronavirus is likely the last big COVID-19 wave in the United States, but the pandemic is far from over globally, former U.S. Food and Drug Administration Commissioner Scott Gottlieb said on Monday.

“I think this Delta wave is probably the last major surge of SARS-CoV-2 infection that we have in the U.S., barring something unexpected happening,” Gottlieb, author of “Uncontrolled Spread,” a new book on the U.S. response to the pandemic, said in an interview.

Although Delta is waning in Southern U.S. states, he said infections are picking up in some states in the West and Midwest.

“It’s largely coursed its way through the U.S., and so maybe by Thanksgiving, on the back-end of that, we’ll start to see prevalence levels nationally decline in a more uniform scale,” he said.

“I think the big question mark is what happens in the Northeast,” said Gottlieb, adding that infections there have only picked up slightly, but likely will rise despite its being the most heavily vaccinated part of the country.

“I still think that Delta is going to sweep through the Northeast,” he said.

Gottlieb, who serves on the board of directors of Pfizer Inc (PFE.N), which co-developed one of the most widely used COVID-19 vaccines with German partner BioNTech SE , said the challenge for the rest of the world will be getting vaccine distributed to remote settings.

Over the next 12 months, COVID-19 vaccine manufacturers collectively will produce between 10 and 15 billion doses of vaccines.

With a global population of 7.5 billion, and 5 to 6 billion doses already distributed, lack of supply is no longer the biggest challenge, he said.

“The challenge is going to be getting the distribution on the ground in hard-to-reach settings, and that’s where there really isn’t any focus.”

The World Health Organization should focus on building the infrastructure required for global distribution, he said.

“I think that’s where the world should be putting some money. I think the supply will be there.”