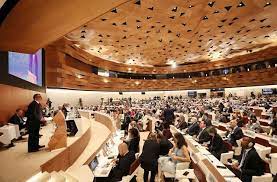 GENEVA, May 27 (Reuters) – Countries have agreed to an initial U.S.-led push to reform of the rules around disease outbreaks, known as the International Health Regulations, after early opposition from Africa and others was overcome this week, sources told Reuters on Friday.The amendments, once confirmed by the World Health Organization (WHO) assembly, are one of a handful of concrete outcomes from a meeting seen as a once-in-a-generation chance for the U.N. health agency to strengthen its role following some 15 million deaths during the COVID-19 pandemic. The reform sought by Washington and backed by others like Japan and the European Union is a first step in a broader reform of the IHR, which set out countries’ legal obligations around disease outbreaks, expected to take up to two years.Earlier this week, African countries and others voiced opposition to the approach but three diplomatic sources said this was overcome through changes to the proposal’s wording. read more”A compromise was reached in the corridors last night,” said one of the sources who was not authorised to speak about the negotiations publicly.The new proposal, yet to be formally approved by the assembly, now refers to steps to address “equity” issues – a key issue for developing countries including many in Africa which are seeking guarantees about the sharing of vaccines and treatments for future health emergencies.The initial changes foresee a change to Article 59 that would speed up the implementation of reforms from 24 to 12 months.Other U.S. proposals yet to be negotiated by the WHO’s 194 members include the possible deployment of expert teams to contamination sites and the creation of a new compliance committee to monitor the rules’ future implementation.Russia has also submitted IHR reform proposals that have not yet been made public.

Monkeypox can be contained if we act now, WHO says
Disease experts call on WHO, governments for more action on monkeypox