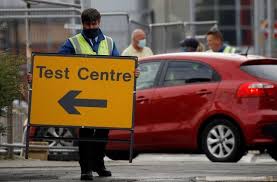 The spread of the coronavirus is accelerating across all parts of England with one study suggesting cases were doubling each week, fuelling concerns further public restrictions could be needed just days before a ban on gatherings comes into effect. On Friday, the government brought in new limits on households meeting up in Birmingham, England’s second biggest city, and some surrounding areas, where the number of COVID-19 infections has been increasing significantly. It is the latest area of England to introduce stricter lockdown measures, with the rising number of cases prompting Prime Minister Boris Johnson to announce earlier this week there would be new restrictions on social gatherings, saying there was a clear need to act. From next Monday, gatherings of more than six people will be banned in England, after the number of new coronavirus infections across the United Kingdom edged up to around 3,000 a day, from less than a third of that number a month ago. According to a government-backed surveillance project, the infection rate is rising across all age groups, apart from those over 65, and cases are no longer clustering in hospitals or care homes as they were a few months ago. The researchers at Imperial College calculated the reproduction “R” number of COVID-19 infections in England, which measures how many people an infected person will pass the disease to, is at 1.7, indicating the epidemic is growing. The government’s official R estimate for the whole of the United Kingdom released on Friday is between 1 and 1.2.The United Kingdom reported 3,539 confirmed new cases of COVID-19 on Friday, up by one-fifth from Thursday’s figure, and the highest level since mid-May. “This is a massive blow to the government’s strategy to contain the spread of COVID-19,” said Simon Clarke, an expert in cellular microbiology at Britain’s University of Reading. “It’s likely that the coronavirus is circulating more freely out in the community again, meaning we are likely to need greater restrictions on our lives to push the transmission rate back. ”The signs of a new wave of infections emerged at the end of the summer as people began resuming parts of their pre-coronavirus lives, travelling overseas and socialising in cafes, restaurants and parks. Some people, especially the young, have been accused of relaxing their vigilance and not following rules on social distancing. Matt Hancock, the health minister, urged people not to jeopardise hard-won gains made against the virus during a two-month lockdown earlier this year. “The pandemic is not over, and everyone has a role to play to keep the virus at bay and avoid further restrictions,” he said. “We’ve seen all across the world how a rise in cases, initially among younger people, leads to hospitalisations and fatalities. ”The United Kingdom has suffered more than 65,000 excess deaths from coronavirus, according to the government’s statistics office, with a surge that lasted longer and spread to more places than those in other hard-hit European nations like Italy and Spain.