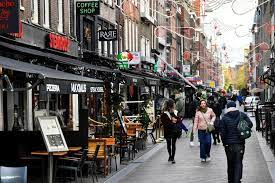 Dutch to allow bars, restaurants to reopen in ‘calculated risk’

The Netherlands will ease COVID-19 lockdown measures next week, allowing bars and restaurants to serve indoors and museums to reopen in what Prime Minister Mark Rutte on Friday called a “calculated risk”.

“We are moving from closed, unless, to open, unless,” he told reporters.

Infections have fallen by more than half in the past month as the rollout of COVID-19 vaccinations gathers pace, allowing a further easing of the lockdown, which has been in effect in various stages for almost eight months.

Previous steps in recent weeks allowed for secondary schools to reopen and for meals and drinks to be served on outdoor terraces until 8 p.m.

Bars and restaurants will now also be allowed to serve customers indoors and to stay open until 10 p.m., Rutte said.

At home, people will be allowed to receive four visitors at a time, up from the present two.

Health Minister Hugo de Jonge said the drop in infections was mainly due to vaccinations.

“Almost half the people over 18 have had their first jab,” De Jonge said.

The government also announced that if infections stay at the current level, more restrictions will be lifted on June 30.

From that date, sports matches will be allowed, restaurants will be able to serve up to 100 people and stay open till midnight. At home, people will be allowed to receive up to eight guests.

There was bad news for Dutch football fans – large indoor and outdoor screens showing the European Championships, which kick off on June 11, are expressly forbidden.

Blinken says U.S. and India united in tackling COVID-19
Search for origin of COVID-19 ‘poisoned by politics’, says WHO expert
To Top
Translate »