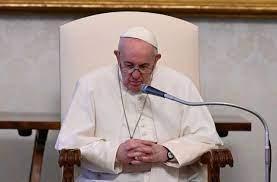 Pope Francis kicked off a month-long marathon of worldwide Roman Catholic prayer on Saturday to ask God for an end to the COVID-19 pandemic, and said money spent on armaments should be used instead to prevent future outbreaks.

Francis presided at the recital of the rosary in St. Peter’s Basilica on the first day of May, a month Roman Catholics traditionally dedicate to daily prayer to the Madonna.

Each day during the month, Roman Catholics have been asked to pray for a specific category of people affected by the pandemic, such as those who were unable to say goodbye to their dying loved ones, health workers, the poor, the homeless and those thrown into economic difficulty.

The pope prayed that “this difficult trial ends and that horizons of hope and peace return”.

He asked the Madonna to “touch consciences so that enormous sums spent to increase and perfect armaments be destined instead to promote adequate studies to prevent similar catastrophes in the future”.

Catholics in 30 shrines around the world that are dedicated to the Madonna, such as Our Lady of Guadalupe in Mexico City and Our Lady of Fatima in Portugal, will take turns leading the prayers each day during the month.

The rosary recitals, which will be broadcast on television and streamed on the internet each day at 6 p.m. in Rome (1600 GMT), will be closed by the pope at the end of the month at a service in the Vatican gardens.

At Saturday’s service, Francis blessed 30 sets of rosary beads that will be sent to the 30 shrines taking part.