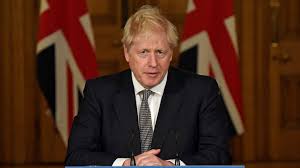 The PM says a new Covid-19 vaccine is good news but warns the country not to “slacken our resolve”The breakthrough of a coronavirus vaccine has “cleared one significant hurdle but there are several more to go”, Boris Johnson has said.The PM said early findings showing a jab could prevent 90% of people getting Covid-19 were positive, but added it was “very, very early days”.He warned people not to “rely on this news as a solution” to the pandemic.”The biggest mistake we could make now would be to slacken our resolve at a critical moment,” he said.England’s deputy chief medical officer, Prof Jonathan Van-Tam, said he was “hopeful” the first vaccine could be seen by Christmas.Speaking alongside Mr Johnson at a Downing Street news conference, Prof Van-Tam said that there was more work to be done before it became available to the public.”This is a very important scientific breakthrough. I am certain of that,” he said.”I am hopeful because of all that, but not yet certain that we could begin to see some vaccine by Christmas.”And he said age would be the “biggest priority” when drawing up a list of who would be able to access the new vaccine.Prof Van-Tam added that the development was similar to “getting to the end of the playoff final, it’s gone to penalties, the first player goes up and scores a goal”.”You haven’t won the cup yet, but what it does is it tells you is that the goalkeeper can be beaten,” he said.The prime minister said that “if and when” the vaccine was approved for use, the UK “will be ready to use it”.He said an order of 40 million doses – enough to vaccinate up to 20 million people – had been ordered, putting the UK near the front of the queue of countries in securing the jab.Prof Van-Tam warned it was not yet known whether any vaccine would prevent someone passing on coronavirus to someone else.Mr Johnson said levels of Covid-19 remained significant and were doubling in many areas, with recent data showing one in 90 people in England currently has the virus.”There is a long way before we have got this thing beat,” he said.He reiterated the government’s intention to end England’s current lockdown on 2 December and replace it with tiered regional restrictions.In other developments:■ Wales’ 17-day firebreak lockdown has ended, meaning people can travel anywhere within the country, two households can again form a bubble and businesses that shut can now reopen■ Scotland’s First Minister Nicola Sturgeon said the country’s Covid-19 restrictions are “highly unlikely” to be eased when they are reviewed on Tuesday■ The coronavirus mutation causing concern in Denmark has arisen before in mink in the Netherlands, scientists have said – but it did not spread to humans there.Source: BBC News