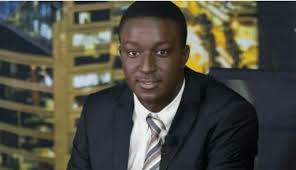 Cooped up in an isolation ward, a young Zimbabwean man who had been diagnosed with Covid-19, pleaded with his family for help.
Thirty-year-old Zororo Makamba was “alone and scared”, according to his older brother who spoke to Zimbabwe’s privately owned Daily News newspaper.

Makamba was being treated in the Wilkins Hospital, designated as the main isolation facility for coronavirus patients in Zimbabwe’s capital, Harare.

Shortly after he talked to his family, he was dead.
The death of Makamba, a well-known journalist, came swiftly – less than three days after his diagnosis.

Famous for his online social and political commentary, under the banner “State of the Nation”, his death achieved an unwanted milestone.

He was the country’s first coronavirus casualty and it shocked Zimbabwe.
The fact that Makamba came from a wealthy, high-profile family did not save him, and family members have argued that his death has exposed the inadequacies of the country’s medical response to the threat of conronavirus.

‘Death could have been avoided’
“The government is ill prepared to deal with the virus,” older brother Tawanda Makamba told the Daily News.

The health ministry said his pre-existing condition made him vulnerable to the disease. He had undergone surgery last November to remove a tumour from under his lung and was in recovery.

While his family admit that his immune system was compromised, they insist that his death could have been avoided.

Very few governments were prepared for a public health crisis of this magnitude.

As the coronavirus swept through Asia, Europe and the US, Zimbabwe has watched from the sidelines as advanced economies with better developed health care systems have buckled under the strain.

The shortage of hospital beds, of protective clothing and life-saving equipment, such as ventilators, is a global problem.

‘World needs to know what happened’
The difference is that many of these countries were overwhelmed by hundreds and then thousands of patients. Zimbabwe, it seems, was overwhelmed by one.

“The world needs to know what happened to Zororo,” his brother Tawanda told the BBC in a brief phone conversation.
Zororo Makamba had returned from New York with flu-like symptoms and was told by his doctor that it was a regular flu, the family says.
But on Friday 20 March his condition deteriorated and he was tested for coronavirus. The positive result did not come through until the early hours of Saturday morning, but his admission to the isolation facility was delayed because “they were not ready to admit him”, according to his family.

He was eventually admitted, despite there being no ventilator to help him breathe. Makamba then died on Monday morning.
The Harare city authority denies there was negligence.
In a series of messages posted on social media it said that “the hospital staff did all they could to save his life”, but admitted the clinic did not have ventilators.

“Not all patients require ventilators… we started with one of the worst cases which required a ventilator,” the city’s health director Dr Prosper Chonzi told state media.

They also had not received needed funds from central government to equip their facility to deal with coronavirus cases.
“We were given an unfunded mandate,” Dr Chonzi said.
The government has admitted concerns about its preparedness, if cases spike.

“People are rightly expressing concern over our capacity to fight Covid-19,” government spokesman Nick Mangwana said in a tweet.
“We can fight this if [we] take a national approach.”

President Emmerson Mnangagwa said that as “each day passes we increase our capacity to respond”. He has since announced a nationwide lockdown to begin on Monday.
But the state of Wilkins Hospital is symptomatic of a broader problem.

For decades Zimbabwe’s health system has been in decline. At their worst, public hospitals have had no running water and no pain killers. Doctors say they have sometimes been forced to wash and reuse bandages.

Critics have blamed the government for allowing the situation to deteriorate, pointing out that top officials have been known to seek treatment abroad at the expense of the public.
After Makamba’s death, some private sector companies on Wednesday announced plans to establish isolation facilities at several idle private clinics.
The announcement has been met with both joy and cynicism.

Some have said that the intervention at this stage is welcome, but others say the rich and powerful are setting up facilities for themselves.

The government insists access will be for all.
Meanwhile, a large consignment of protective equipment and test kits have arrived in the country, courtesy of Chinese billionaire Jack Ma and Wilkins Hospital is undergoing renovations thanks to Chinese aid.
Ventilators have also been donated to Wilkins, but they came too late for Makamba.
The young journalist’s death was “his most profound and emphatic State of the Nation… he exposed the lies of government and the opposition,” media owner Trevor Ncube tweeted.

“His lonely and painful death reminded us all that we are the change that we seek.”
SOURCE: BBC News