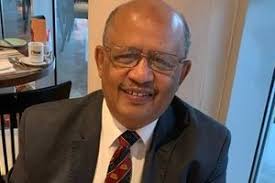 An organ transplant consultant has become the first working NHS surgeon to die in the UK from coronavirus.

Adil El Tayar had worked around the world including in Saudi Arabia, Sudan as well as at St Mary’s and St George’s hospitals in London.
His family said Dr El Tayar died on 25 March at West Middlesex University Hospital in Isleworth, west London.

The British Ambassador to Sudan has paid tribute along with journalist Zeinab Badawi – Dr El Tayar’s cousin.
Dr El Tayar had been self-isolating after developing symptoms around mid-March and he was admitted to hospital on 20 March.

‘Horrible disease’
The 63-year-old had tested positive for coronavirus and spent his final days in intensive care, his cousin Dr Hisham El Khidir said.
“His son was really scared that he wasn’t going to make it. This disease is horrible and is going to cause more heartbreak for many more families for weeks to come,” he said.
“Adil was someone who was central to our family, who was well-respected by so many people.
“Since his death on Wednesday I have had hundreds of text messages from his colleagues and friends. He will be sorely missed.”

He worked as a transplant surgeon at St George’s Hospital, Tooting, before moving to Saudi Arabia in 2007, where he spent three years working at the King Fahd General Hospital in Jeddah.

In 2011, Dr El Tayar moved back to his native Sudan to help establish a transplant program and worked at the Ibn Sina Hospital, Khartoum.

Following this, he worked again at St George’s Hospital as a locum surgeon and in a tribute consultant surgeon Abbas Ghazanfar said Dr El Tayar was a “noble human being”.
“Mr El Tayar was a very hard working and dedicated surgeon who gave the precious gift of life to so many people around the world by his excellent transplanting skills,” Mr Ghazanfar said.
“He was an excellent colleague, a truly humble soul.”

In the days before he fell ill, he worked at a hospital in the Midlands and he believed that’s where he must have picked up the disease, Dr El Khidir said.
“He lived in London, but worked up in the Midlands during the week. I asked him where he thought he might have got the virus and he said his week was mainly working, eating a meal in the canteen and then going to his room,” he said.

“We feel doctors at the moment really are open to the disease and they need a bit more protection than what is being offered. We doctors feel like sitting ducks.
“When Prince Charles, the prime minister and the health secretary catch the disease it is clear something is going wrong.”

Sudenase-British journalist Zeinab Badawi said she learned of Dr El Tayar’s death on Thursday minutes before she joined millions applauding NHS workers.
Ms Badawi told BBC Radio 4: “[He was] a dedicated doctor and devoted family man with four children.
“Adil was a stoic and an optimist and was never one to imagine the worst so he thought he would soon recover.
“But, after a week in bed he took a turn for the worse and became very breathless. He knew what that meant and his children insisted he go to hospital.
“They called for an ambulance – he managed to walk by himself to get into it. After he was admitted to hospital he was soon put on a ventilator.”

Ms Badawi said Dr El Tayar had volunteered to be on the frontline of the health service in order to fight the coronavirus outbeak – but in the end he had paid for it with his life.
“This virus is unforgiving,” she said. “Indiscriminate and it can be brutal.
“Adel’s death had come out of the blue and his family are bereft, bewildered and struggling to come to terms with his passing.
“Of course coronavirus is only fatal in a very small number of cases – but make no mistake about its capacity to unleash tragedy in the most unexpected way.”
SOURCE: BBC News