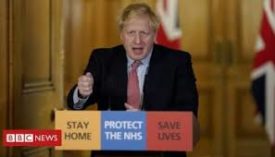 The prime minister may be in isolation with coronavirus, but he tried to rally the country on Sunday night in his latest message to the nation. It came after two days in which the UK death toll jumped significantly to 1,228, including two NHS doctors.
Citing the 20,000 former NHS staff who have returned to work and the 750,000 members of the public who have volunteered to help the most vulnerable, a croaky-sounding Boris Johnson said it was proof his Conservative predecessor Margaret Thatcher was wrong when she famously declared “there is no such thing as society”.
The PM also said the majority of people appeared to be obeying social distancing restrictions imposed to slow the spread of the virus, despite some eye-catching exceptions.

Earlier, England’s deputy chief medical officer Dr Jenny Harries warned it could be six months before life in the UK returned to normal – although she stressed that didn’t mean “complete lockdown” for all that time. Instead, restrictions will most likely be eased gradually over the next three to six months. Lifting restrictions too early could be dangerous, she added.
We’re all becoming very familiar with the need to keep at least two metres away from other people – health correspondent Laura Foster helps explain the best ways to do that. You can also meet some of the “shielded” – those enduring 12 weeks of total isolation – and watch the impact of the “stay at home” message on London’s usually clogged streets in this striking timelapse video.

Global picture
Donald Trump had said he believed the US could get back to something approaching normal by Easter, but on Sunday night, the president appeared to abandon that hope. He said social distancing measures would be extended across the US until at least 30 April. The death toll in the US has reached almost 2,500, and earlier, White House medical adviser Dr Anthony Fauci warned the virus could eventually kill up to 200,000 Americans.
Elsewhere in the world, Australia has tightened restrictions on public life designed to tackle the disease, while India’s prime minister has apologised for the impact of similar curbs. Narendra Modi has been criticised over the lack of planning ahead of India’s shutdown, which has left many citizens jobless and hungry.

Globally, there have been more than 720,000 infections and almost 34,000 deaths. Italy remains by far the worst hit country, with more than 10,000 fatalities, followed by Spain and then China.
SOURCE: BBC News