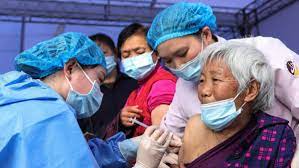 BEIJING, March 18 (Reuters) – Older people in China should get vaccinated against COVID-19, senior Chinese health officials said on Friday, adding that deaths among the elderly in the latest wave to hit Hong Kong serve as a lesson for the mainland.”The outbreak in Hong Kong is a particularly profound lesson for us, an example that if the vaccination rate for the elderly is low, the rate of severe cases and deaths will be high,” Wang Hesheng, deputy director of the National Health Commission, told a news briefing.”We must not regret when it is too late,” he said.Only 19.7% of people aged over 80 in China have received a COVID-19 vaccine booster as of March 17, and just 50.7% of that age group have completed their primary vaccinations, said Zeng Yixin, another NHC deputy director.Densely populated Hong Kong has registered the most deaths per million people globally in recent weeks – more than 24 times that of rival Singapore – due to a large proportion of elderly who were unvaccinated as the highly transmissible Omicron variant ripped through care homes.Chinese officials have made its clear that China will not anytime soon ditch its “dynamic-clearance” policy that aims to contain each flare-up quickly, or loosen its weeks-long quarantine requirement for most international travellers.These stringent measures have helped mainland China keep its official death toll largely static since 2020, with only two fatalities reported in 2021 and none so far this year. For mainland Chinese aged 60-69, 56.4% have received a booster shot while that falls to 48.4% for those aged 70-79, Zeng said.He added that there are still 52 million people over 60 who have not completed their primary vaccinations.