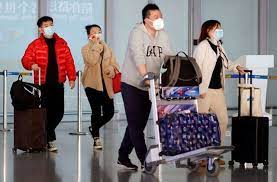 BEIJING, July 8 (Reuters) – China’s national authorities are reducing scrutiny of citizens’ travel history for COVID-19 monitoring, requiring that a mandatory mobile app shows the previous seven days of travel, down from 14, an adjustment likely to boost domestic tourism.The app, whose name translates to itinerary card, helped authorities to identify whether people visited areas with COVID infections, and to decide whether they should be tested for the virus or possibly placed in quarantine.On Friday, one of the developers of the app said it would only display the cities that users had visited in the past seven days, down from two weeks.The reduction in the travel history record quickly became one of the top 20 trending topics on the Weibo social media platform, with more than 180 million reads.”This is a good thing for everyone, we no longer have to worry about our travel history for half a month,” said one user.”14 days was too difficult for those who have to go on a lot of business trips,” said another.This was the second major change on the app in recent days.Last week, it completely stopped posting asterisks alongside the names of cities with small zones that had been listed as medium or high risk.That adjustment came as the government said it would slash COVID quarantine requirements.The changes led to a surge of online searches for flights and hotels. The app is one of many tools China uses as part of its “dynamic COVID zero” policy, a strategy that has helped keep the number of infections extremely low but has heavily dented the economy with its sweeping curbs.Many local governments also have their own mobile apps to display people’s travel histories, and vaccination and health status. Many people have complained on social media that their employers have told them not to travel when new outbreaks emerged.Domestic travel was hit hard China’s response to outbreaks of the highly infectious Omicron variant in April and May, which brought drastic lockdowns in several cities.