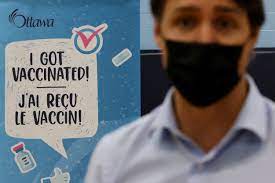 TORONTO, Oct 20 (Reuters) – Canada will unveil plans on Thursday for a vaccine passport, a government source said on Wednesday, with Prime Minister Justin Trudeau laying out how the proof-of-vaccination method will be implemented.

Trudeau is slated to speak to reporters in Ottawa at 10 a.m. following a technical briefing by officials from several government departments including immigration, public health, transportation and the Canada Border Services Agency.

As COVID-19 vaccination rates rise and travel resumes, countries including Canada have begun requiring proof of vaccination as a condition of travel. For Canadians, that has so far meant receipts or QR codes that differ from province to province.

Canada recently reopened its borders to international travelers bearing proof of vaccination, and previously waived quarantine requirements for returning Canadian travelers who showed they were immunized.