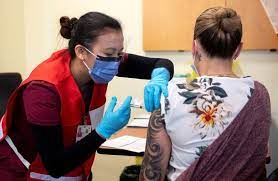 OTTAWA (Reuters) -Canada will send the armed forces and Red Cross to Ontario to help the country’s most populous province as it struggles to cope with a surge in hospitalizations from COVID-19, the country’s public safety minister said on Monday.

The federal government approved a request from Ontario which would include air lifting medical personnel from the Atlantic province of Newfoundland and Labrador to Toronto, the epicentre of Ontario’s third wave, a spokesman from Public Safety Canada said in a statement, without giving details of personnel involved.

Bill Blair, minister of Public Safety Canada, said on Twitter the federal government has agreed to provide support to the provincial healthcare system.

Ontario reported 877 people in its intensive care units with COVID-19 on Monday. Provincial modelling showed the virus could see 1,500 people in the ICU by early May.

The province is also battling a surge in its northern oil sands and Premier Jason Kenney said some of the spread in infections came from workers socializing without masks in camps after work hours.

Wood Buffalo, where the oil sands are located, has the highest rate of new cases per capita in the province, with Alberta itself averaging 249 cases per 100,000 people reported in the past seven days.

Separately, Canada on Monday backed the use of Johnson & Johnson’s Janssen COVID-19 vaccine despite reports of rare blood clots, noting the issue had first been identified in doses made by AstraZeneca PLC.

The federal health ministry said on Twitter it “continues to consider the benefits of vaccination to outweigh these very rare potential risks, and supports the use of the Janssen and AstraZeneca vaccines.”

The first Canadian deliveries of Janssen doses are due this week.