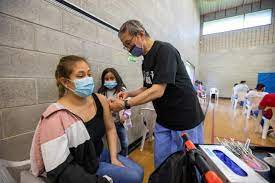 OTTAWA, July 30 (Reuters) – Canada must vaccinate as many people as possible and cautiously relax public health measures as COVID-19 case numbers creep higher at the start of what could be a fourth wave, the country’s top health official said on Friday.

Rising case counts suggest “we are at the start of the Delta-driven fourth wave, but that the trajectory will depend on an ongoing increase in fully vaccinated coverage and the timing, pace and extent of reopening,” Chief Public Health Officer Theresa Tam told reporters.

Of the variants detected in Canada, the Delta increased more than five-fold in June, Tam said. Nationally, the seven-day rolling average of cases is 93% lower than it was at the peak of the third wave, but the average is climbing again, official data show.

Separately, Canada extended by about a month its main pandemic support measures, including subsidies for businesses to pay wages and rent, to Oct 23.

Businesses had been pushing for an extension just as the Liberal government appears poised to seek a September snap vote. Finance Minister Chrystia Freeland said the measures were still needed because the economy was still in the process of reopening.

If health restrictions are relaxed too quickly before more of the population is fully vaccinated, “we could expect to see a sharp resurgence by the end of the summer”, Tam said.

More than 81% of Canadians eligible for vaccines have had one shot, and more than 66% are fully inoculated. But some 6 million people still need to be vaccinated, she said.

She noted that Britain had seen a sharp rise in new cases, but now they are falling as more and more people get inoculated.”

International experience with Delta driven waves underscores the need for gradual and cautious lifting of restrictions until fully vaccinated coverage is high across the population,” Tam said.