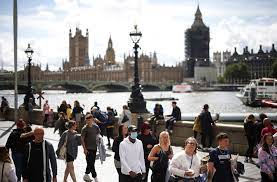 LONDON, Aug 26 (Reuters) – The British public’s view of the government’s management of the coronavirus crisis has turned negative for the first time since February and they are worried about the risk of a new wave of infections, according to a survey published on Thursday.

Against a backdrop of a renewed rise in cases caused by the Delta variant of the virus, Kantar Public said 48% of people it polled thought the government was handling COVID-19 poorly, up three points from July, while 43% said it was doing well, down six points.

Two-thirds of respondents were concerned that there would be further waves of COVID-19 infections after the summer compared with 28% who were not concerned.

Britain has suffered one of the world’s heaviest COVID-19 death tolls and it locked down its economy for longer than many other countries last year, and in early 2021.

But it has also rolled out vaccinations at a faster rate than its peers which boosted the approval ratings of Prime Minister Boris Johnson and his government earlier this year.

The Kantar poll also showed a fall this month in the share of people who expected the economy would be doing better in 12 months’ time – down seven percentage points to 30%.