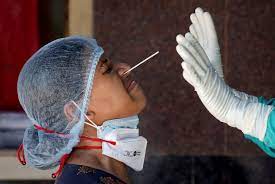 LONDON (Reuters) – British officials could declare one of the new coronavirus strains first found in India a “variant of concern”, the BBC and Guardian reported on Friday, due to evidence that it spreads more quickly than the original version of the virus.

Scientists and doctors have recommended that one version of the variant first found in India, known as B.1.617.2, is designated a “variant of concern”, as it appears to have been spreading more quickly in the United Kingdom than other variants, the BBC said.

The original India variant, B.1.617, was first detected in October, but Public Health England (PHE) has categorised three different subtypes, all with slightly different mutations.

While B.1.617.2 seems to be as transmissible as the Kent variant which fuelled much of Britain’s second COVID-19 wave, there is no evidence it is resistant to current vaccines, the BBC said, citing a source.

Other variants of concern include variants first identified in Kent, south-east England, as well as South Africa and Brazil.