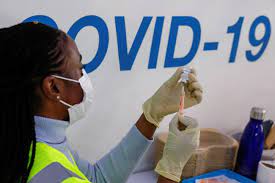 Aug 19 (Reuters) – The mass rollout of COVID-19 booster vaccines in Britain to residents over 50 this autumn could be shelved, with government scientists considering limiting third doses only to the most vulnerable, The Telegraph reported on Thursday.

Britain’s National Health Service (NHS) had drawn up plans to roll out a booster programme from September, based on interim advice from the Joint Committee on Vaccination and Immunisation, the newspaper said.

However, sources close to the committee told The Telegraph there is limited evidence to support such an approach and a “far more restricted” group, focused on those most in need, may be targeted.

“Any booster programme will be based on the final advice of the independent Joint Committee on Vaccination and Immunisation. Until we receive the independent JCVI advice, no decisions can be made on wider requirements for those who receive booster jabs”, a government spokesman was quoted as saying by the newspaper.

Oxford vaccine chief Andrew Pollard said earlier this month that booster shots for COVID-19 vaccines were not currently needed by Britain and the doses should be given to other countries. Britain had been planning for a COVID-19 vaccine booster programme, and health minister Sajid Javid said he expected the programme to begin in early September, pending final advice from officials.