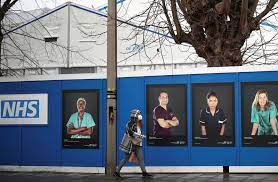 LONDON, July 25 (Reuters) – Britain’s state-run National Health Service (NHS) is facing its worst ever staffing crisis with thousands of vacancies and the government has no credible strategy to address the problem, a committee of lawmakers said in a report published on Monday.Tackling a health service staggering under the combined pressure of long waiting lists and staffing shortages will be one of the top tasks facing Boris Johnson’s successor as prime minister when they take office in September.”We now face the greatest workforce crisis in history in the NHS,” said Jeremy Hunt, chair of parliament’s cross-party Health and Social Care Committee and a former health minister.”Persistent understaffing in the NHS poses a serious risk to staff and patient safety, a situation compounded by the absence of a long term plan by the government to tackle it.”The NHS, which has provided healthcare free at the point of use since 1948, is facing a record 6.5 million patients on waiting lists for hospital treatment due to backlogs caused by the coronavirus pandemic.Successive governments have tried and largely failed to address the challenges of a health system pressured by an ageing population, with Johnson’s 2019 election manifesto pledged to boost funding and add 50,000 more nurses.The committee’s report said the government had shown a “marked reluctance to act decisively” and was yet to publish an NHS workforce plan that was due earlier this year.”The clearest and most urgent need is action on workforce planning,” it said, also calling for a “radical review” of working conditions for an exhausted NHS workforce in which it said many also face racism, bullying and harassment.According to NHS data, there were more than 105,000 vacancies as of March, up from 76,000 the previous year, while the report said the NHS in England could be short of 12,000 hospital doctors and more than 50,000 nurses and midwives.The report said an estimated 475,000 jobs could be needed in health by early in the next decade, and called for reforms to the health and care visa scheme to boost foreign recruitment. It also said a cap on the number of medical school places offered to international students should be lifted.