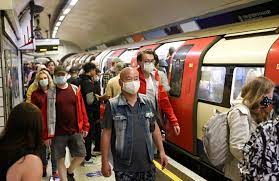 The figure meant cases reported between Aug. 24 and Aug. 30 were up by 1.8% compared with the previous seven days.

Case numbers often dip after weekends and the latest figure might be skewed by Monday’s bank holiday in much of the United Kingdom.

A further 48 people were reported as having died within 28 days of a positive test for COVID-19, the lowest since Aug. 23, taking the seven-day increase to 14.8%.