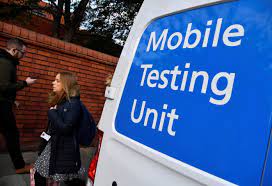 LONDON, Oct 23 (Reuters) – Britain recorded the highest number of new cases of COVID-19 since July over the past week, government figures showed on Saturday, a day after Prime Minister Boris Johnson played down the prospect of a return to lockdown.

Some 333,465 people in Britain tested positive for COVID-19 over the past seven days, up 15% on the previous week and the highest total since the seven days to July 21.

Daily figures showed there were 44,985 new cases on Saturday, down from 49,298 on Friday. Daily death figures were only available for England, and showed 135 fatalities within 28 days of a positive test.

Deaths have risen by 12% over the past week, and the total since the start of the pandemic now stands at 139,461, the second highest in Europe after Russia.

While vaccination and better medical treatment have sharply reduced deaths compared with previous waves of the disease, hospitals are already stretched and Britain’s current death rate is far higher than many of its European neighbours.

Government health advisors said on Friday that preparations should be made for the possible reintroduction of measures to slow the spread of the disease, such as working from home, as acting early would reduce the need for tougher measures later.

Johnson, however, said he did not expect a return to lockdown.

“We see absolutely nothing to indicate that is on the cards at all,” he said on Friday.