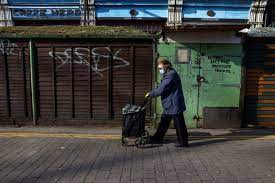 Britain on track to ease lockdown measures in line with plan: health minister

LONDON (Reuters) – Britain is on track to ease lockdown measures in line with its roadmap, health minister Matt Hancock said on Saturday after announcing that half of all adults in the country had now had at least one COVID-19 vaccine dose.

“There is no sign that we won’t be able to make progress as set out in the roadmap,” Hancock told Sky News.

Asked about the threat of a third wave of infections in Europe and what that could mean for Britain, Hancock said the government would be vigilant in protecting the country.

Rising infections in Europe could derail Britain’s plan to restart travel, which could possibly be from May 17.

The government is due to say more on April 12, and Hancock confirmed that the judgment on travel was one to make in a few weeks, not now.

“We’ll look at the rates both here and abroad and the impact of new variants to understand whether its safe to make that move,” he said.