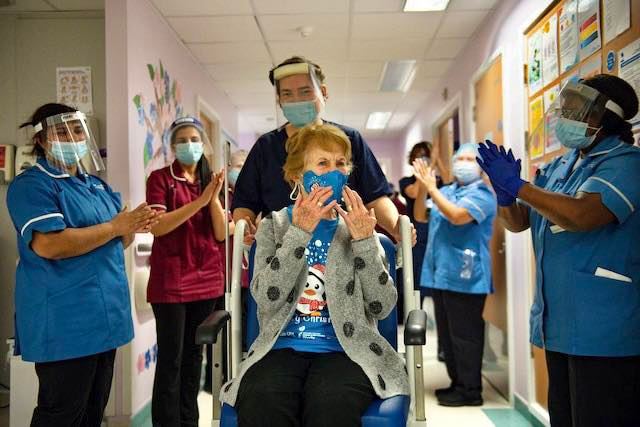 LONDON, Dec 8 (Reuters) – Britain on Wednesday marked a year since the first person in the world was given a Pfizer-BioNTech COVID-19 vaccine outside of clinical trials, calling for people to receive booster shots as soon as they are eligible.On Dec. 8, 2020, Margaret Keenan, a 90-year-old grandmother known to friends as Maggie, became the first person to get the shot following its clinical approval, describing it as the “best thing that has ever happened”. Prime Minister Boris Johnson has highlighted Britain’s early success in rolling out COVID-19 vaccines and said it is why he was able to reopen England’s economy in July.He has called for another vaccination effort for the booster programme on a similar scale to the initial rollout in light of concern over the new Omicron variant, which has also seen him reintroduce some mask mandates and travel restrictions.”Since the first jab was delivered one year ago today, our phenomenal vaccine rollout has saved hundreds of thousands of lives,” Johnson said in a statement.”Vaccines remain our first and best line of defence against the virus – so the best way to continue to protect yourself and your loved ones is to get behind the vaccine programme and get boosted as soon as you’re eligible.”Britain has now given nearly 120 million doses of COVID-19 vaccine, either as first doses, second doses or as boosters.Scientists are concerned that Omicron might be more transmissible than the currently dominant Delta variant and have mutations associated with lower vaccine effectiveness.Health Secretary Sajid Javid has said that boosters should continue to offer good protection against severe disease even if shots are less effective against Omicron than previous variants.”We are working around the clock to boost the booster programme to maximise immunity following the emergence of the Omicron variant,” Javid said.