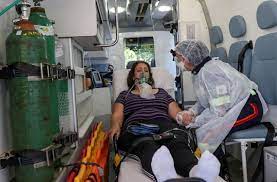 Brazil reports over 150,000 COVID-19 cases in one day amid Rio backlog

BRASILIA, Sept 19 (Reuters) – Brazil reported 935 COVID-19 deaths on Saturday and some 150,106 additional cases, according to data released by the nation’s Health Ministry, an unusually large number due to what officials said was an adjustment in how case numbers are tabulated.

Some 92,614 cases occurred in Rio de Janeiro in recent months, but only entered into the official count in the last 24 hours, the Health Ministry said.

Rio’s state-level health ministry attributed the number of cases registered to new demands from the federal Health Ministry regarding case counting, the details of which were not revealed.

The state health ministry “emphasizes that these are not cases that occurred in the last 24 hours, but rather cases that were not displayed before due to changes in the federal (case counting) system,” it said. “Of these cases, 62% occurred in 2021.”

At least two other states – Paraiba in the northeast and Sao Paulo in the southeast – have seen unusual case jumps in recent days due to changes in the federal case count, according to national media reports.

The South American country has registered a total of 590,508 coronavirus deaths and 21.2 million total confirmed cases.