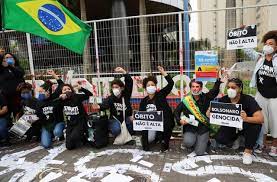 Brazil regulator to probe hospital chain over use of hydroxychloroquine

BRASILIA (Reuters) – The Brazilian agency that regulates health insurance plans has opened an investigation into allegations that a hospital chain tested unproven drugs on elderly COVID-19 patients without their knowledge, the regulator’s director told a Senate inquiry on Wednesday.

It was the first instance of a regulatory agency pledging to look into misdeeds at Prevent Senior, a major healthcare chain serving tens of thousands of patients in the Sao Paulo area.

Paulo Rebello Filho, head of the National Regulatory Agency for Private Health Insurance Plans (ANS), said his staff has detected “assistance abnormalities” at Prevent Senior and the health chain will be put under special technical supervision.

At least nine people died of COVID-19 during the trials at Prevent Senior from March to April 2020, but their charts were altered to hide the cause of death, the inquiry was told last week by a lawyer for 10 whistleblowing doctors.

Prevent Senior has said the accusations, including the altering of patient charts and the firing of doctors who opposed the practice, are unfounded.

Rebello said the ANS opened an administrative process to investigate irregularities at Prevent Senior and has sent officials to verify “indications of operational failures.”

Closer monitoring is not aimed at removing the hospital chain from the market but seeks to guarantee maintenance of quality care, he said.

The regulator head said he had no knowledge of the allegations made by the doctors until they presented to the Senate inquiry.

In a statement, Prevent Senior said it had not been officially notified of the ANS decision. It said it had provided the regulator with documents that show it acted within ethical and regulatory norms.