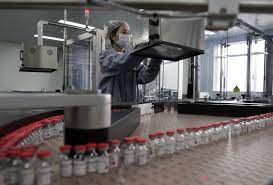 BRASILIA (Reuters) -Brazil’s health minister said on Wednesday he had spoken with Moderna about buying its COVID-19 vaccine, as the country scrambles for shots from producers passed over last year.

Separately, the health regulator Anvisa said it had received an emergency use request late on Tuesday from Belcher Farmaceutica, the Brazilian representative of China’s CanSino Biologics, and it would take up to seven days to make a decision, if the papers are in order.

Brazil is still suffering a long, deadly second wave of coronavirus infections and has struggled to implement an effective nationwide vaccination program. Less than 10% of the population has been fully immunized against the virus.

“I spoke with representatives of Moderna today, and indicated that the Health Ministry and Brazilian government would like to enter into partnership with the manufacturer for the supply of vaccines with a high capacity to respond to COVID-19 variants,” Health Minister Marcelo Queiroga wrote in a tweet.

In early March, before Queiroga became minister, the ministry said it was “practically in the final stage of negotiations” with Moderna for the purchase of vaccines.

The ministry announced talks with Moderna in July 2020.In February, Eduardo Pazuello, then health minister, criticized the price of Moderna’s vaccine.

“The destiny of our country is to be vaccine makers. We will make vaccines for Brazil and Latin America,” Pazuello said at the time. “We can’t count on labs that simply sell us vaccines.”

Brazil is currently using locally finished vaccines produced by AstraZeneca and China’s Sinovac, as well as imported doses of the shot from Pfizer/BioNTech.

“China is committed to continue and expand its vaccine partnership with Brazil,” China’s ambassador to Brazil, Yang Wanming, tweeted on Wednesday.

Five of every six COVID-19 shots administered in Brazil through April came from a partnership between Sinovac and Sao Paulo’s Butantan biomedical institute, but production has sputtered due to delayed shipments from China.

Most Canadians approve of a vaccine passport – at least for travel
Pfizer COVID-19 vaccine can be stored in refrigerator for a month, U.S. says