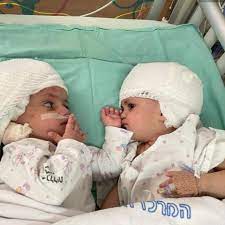 BEERSHEBA, Israel, Sept 5 (Reuters) – One-year-old twin Israeli girls who were born conjoined at the head, back to back, can make eye contact for the first time after undergoing rare separation surgery.

The more than 12-hour operation at the Soroka Medical Centre took months of preparation and involved dozens of experts from Israel and abroad, the hospital said on Sunday.

“This was a rare and complex surgery that has been conducted only 20 times worldwide and now, for the first time, in Israel,” said Mickey Gideon, Soroka’s chief pediatric neurosurgeon.

Photos in Israeli media showed the twins – whose names were not provided – facing one another in a cot, their heads bandaged. The Soroka statement said the surgery involved cranial reconstruction and scalp grafts for both.

“They are recovering nicely. They are breathing and eating on their own,” Eldad Silberstein, the head of Soroka’s plastic surgery department, told Israel’s Channel 12 news.