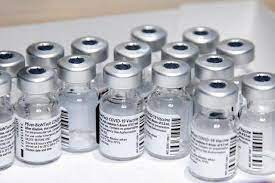 FRANKFURT, May 9 (Reuters) – BioNTech’s (22UAy.DE) first-quarter sales and earnings more than tripled thanks to demand for the COVID-19 vaccine it developed with Pfizer (PFE.N), but the German biotech firm is still forecasting a full-year decline in vaccine sales.Quarterly revenues more than tripled from a year earlier to 6.37 billion euros ($6.73 billion), as did net income, to 3.70 billion euros, the company said on Monday.”As a result of an increased order volume initially placed in late 2021 following the then-emerging Omicron variant, we began the year 2022 with strong revenues and earnings, leaving us well-positioned to achieve the 2022 financial guidance,” finance chief Jens Holstein said.BioNTech stood by its 2022 vaccine revenue guidance of 13 to 17 billion euros, down from 19 billion last year, implying a decline during the rest of the year.As previously, BioNTech based its guidance only on firm 2022 orders, which were unchanged at about 2.4 billion doses from a March estimate.Partner Pfizer last week also only considered the current order backlog for its 2022 COVID vaccine sales forecast of $32 billion, down from $36.8 billion last year. Rival Moderna (MRNA.O) was more bullish last week, forecasting higher vaccine sales for the second half of the year than in the first, as it expects demand for booster shots in the autumn. Demand for established COVID vaccines has waned in North America and Europe as those willing to get the shot have mostly had their three-shot course and more shots are only recommended for a small group of most vulnerable seniors.Further orders will be driven by low and middle-income countries and the as-yet uncertain prospect of an Omicron-adapted shot for a booster campaign before the northern-hemisphere winter.China has not approved BioNTech’s vaccine, despite a collaboration agreement with Shanghai Fosun Pharmaceutical and even as authorities wrestle with the country’s worst COVID outbreaks since the epidemic began.BioNTech added on Monday it expects to have trial data on its efforts to develop a shot adapted for Omicron in the coming weeks.The European Union’s drug regulator said last week it hoped to clear adapted vaccines by September and trials should provide more clarity over the next couple of months.Vaccine developers are investigating the relative merits of vaccines that target just one variant per shot versus vaccines that target two.