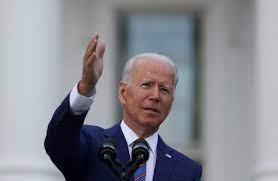 July 6 (Reuters) – U.S. President Joe Biden on Tuesday encouraged Americans who have not yet been vaccinated against COVID-19 to get their shots to protect themselves from the widely-spreading, highly contagious Delta variant of the coronavirus.

Biden told reporters the United States will reach a mark of 160 million Americans being fully vaccinated by the end of this week, but he warned against complacency as the Delta variant spreads among those who have not been inoculated.

Biden said the variant was already responsible for “half of all cases in many parts of this country.”

The Delta variant, which is becoming dominant in many countries, is more easily transmitted than earlier versions of the coronavirus and may cause more severe disease, especially among younger people. It has now been found in every U.S. state, health officials have said.

Biden noted that studies have shown that since early May virtually every COVID-19 hospitalization or death in the United States had been among people who were not vaccinated.

Biden said his administration would devote the remainder of the summer toward getting more people vaccinated, including going door-to-door in neighborhoods to get help to more people who are unprotected from the virus.

He said 42,000 local pharmacies would serve as vaccine sites. Renewed emphasis would be placed on getting vaccines to family doctors and medical providers as well, including those who serve younger people.

Vaccines would also be made available at workplaces, if possible, and more mobile clinics would be used to help at summer festivals, sporting events and houses of worship.