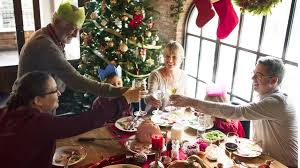 NHS bosses say they are worried about January, after the US saw a spike in cases after Thanksgiving.People must think “really carefully” about the risk of more social contact over Christmas, NHS bosses have warned.”I don’t want to be the Grinch who stole Christmas,” said Chris Hopson, the head of NHS Providers.But he pointed out that the US saw “record numbers” of cases and deaths after the Thanksgiving holiday – and said the NHS was worried about January.The government’s Dominic Raab said people needed the five-day relaxation of Covid rules on “an emotional level”.Meanwhile, the chances of the Oxford University vaccine being rolled out by the end of the year are “pretty high”, the vaccine’s architect Prof Sarah Gilbert has told the BBC.A further 18,447 cases were recorded across the UK on Sunday, along with another 144 deaths within 28 days of a positive test. The number of deaths recorded tends to be lower over the weekend because of reporting delays. ■ UK coronavirus cases up by 21,502 on Saturday■ Find out the rules where you liveBetween 23 and 27 December, coronavirus restrictions are being relaxed across the UK, allowing three households to form a “bubble” and mix indoors and stay overnight.But NHS Providers – which represents hospital trusts in England – has written to the PM urging him to “personally lead a better public debate about the risks inherent in the guidance” – although it stopped short of calling for a review of the rules over Christmas.”There seems to be a sense at the moment that, ‘hey because the government’s put these rules down, there’s no risk to people having more social contact over Christmas’,” Mr Hopson told BBC Breakfast.”Of course, part of it is about sticking to the rules but any kind of extra social contact over Christmas – particularly with those who are vulnerable to the virus – actually is very risky.””I don’t want to be the Grinch who stole Christmas, I really don’t, but I think everybody needs to think really, really carefully what are they going to do over Christmas,” he said.”It’s not, ‘is what we’re going to be doing sticking within the rules?’ It’s ‘how much risk are we going to cause to the people we interact with?'” The rise in infections in the US after the Thanksgiving holiday was also highlighted by NHS Providers.The NHS is worried about the potential pressure on hospital beds, and its ability to treat all the patients it needs to in December, January and February, Mr Hopson said.”At the same time you’ve got rising infections in places like London, Essex, parts of Kent, parts of Lincolnshire,” he added.Foreign Secretary Dominic Raab ruled out any possibility that the government would review the Christmas relaxation of rules.Speaking to Sky News’s Sophy Ridge programme on Sunday, he said: “I think people do need that five-day window over Christmas to spend a bit of time with their loved ones and I think at a mental health level, an emotional level, people do need it.”It comes after public health expert Prof Linda Bauld said loosening Covid restrictions over Christmas was “a mistake”.Wales’ health minister Vaughan Gething said the rules around Christmas could be changed – but it could affect trust in the government.’Third wave risk’NHS Providers also warned that relaxing Covid rules when they are reviewed in England could trigger a third wave of the virus during the busiest time of year for hospitals.England’s three-tier system is due to be reviewed on Wednesday 16 December. It urged the PM against moving any area to a lower tier and said areas should be moved into tier three – the highest level of restrictions – “as soon as this is needed, without any delay”. Earlier this week, some health experts called for London to be placed in tier three “now” after official figures showed Outer London had a higher infection rate than some areas already in the top tier.The government said it “will not hesitate to take necessary actions to protect local communities”. Decisions on tiers are made by ministers, based on the latest available data and advice from public health experts, a spokesperson added. “We have introduced strengthened local restrictions to protect the progress gained during national restrictions, reduce pressure on the NHS and ultimately save lives,” they said.”On top of our record NHS investment, this winter we are providing an extra £3bn to maintain independent sector and Nightingale hospital surge capacity and a further £450m to upgrade and expand A&Es.”Vaccine chances ‘high’Meanwhile, Prof Sarah Gilbert, lead researcher on the Oxford University/AstraZeneca vaccine, was upbeat when asked about the possibility of people receiving the Oxford jab by the end of the year. The vaccine has not yet been approved by the UK’s regulator, but a study this week showed it was safe and effective.”I think the chances are pretty high,” she told the BBC’s Andrew Marr. “But we do need multiple vaccines, all countries need multiple vaccines, the world needs multiple vaccines and we need vaccines made using different technologies, if that’s possible.”SOURCE: BBC News#manchesterunited#HealthForAll#HealthBroadcastingService#GlobalHealth#Covid-19#coronavirus#Health#paulpogba#ukcoronavirus#HealthBroadcastingServiceInPublicHealthPartnership#formula1abudhabi#timespersonoftheyear#manchesterunitedvsmanchestercity#sevillavsrealmadrid#pgaeuropeantour#billbailey#extraterrestriallife#vaccine#davidllander#paolorossi#leicestercityfc#elitedangerous#chelseavsleedsunited#bobingen#euromillions#softbank#ncis#capitalpunishment#juventusfc#goldiehawn#worldhealthorganisation#saturdaynightlive#robertwilkie