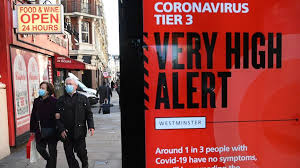 Toughest measures facing 38 million people in England, while Northern Ireland announces a new lockdown.Millions of people across the UK are preparing for tougher coronavirus restrictions amid growing concern about the rising number of cases.Thirty-eight million people in the south and east of England will be living under tier three rules – the strictest measures – from Saturday.Northern Ireland will begin a six-week lockdown from 26 December.Wales had already announced a lockdown from 28 December which will be reviewed every three weeks and has no end date. In Scotland, the government has warned that tougher restrictions – including a potential lockdown – after the festive period cannot be ruled out.Official figures show infection rates went up in every region of England last week, apart from Yorkshire and the Humber.From 00:01 GMT on Saturday, Bedfordshire, Buckinghamshire, Berkshire and Hertfordshire will move up a tier, along with parts of Surrey, East Sussex, Cambridgeshire and Hampshire.Health Secretary Matt Hancock called the new tier levels in England “necessary”, and urged people to take “personal responsibility” for their actions to help curb the spread of the virus.London had the highest rate, at 319.3 cases per 100,000 people in the week to December 13, up from 199.9 in the previous week. The rate went from 152.9 to 249.1 in eastern England, and from 167.6 to 238.7 in the South East.It has prompted fresh concern about the decision by all four UK nations to relax restrictions and allow more mixing for five days over Christmas.Ministers have issued updated guidance for the festive period but Dame Donna Kinnair, chief executive of the Royal College of Nursing, said it would “undoubtedly lead to more cases, more pressure on NHS and care services, and more deaths”.London and parts of Hertfordshire and Essex had already been placed under the top level of restrictions earlier in the week.Bristol and North Somerset will move from tier three to tier two, and Herefordshire will move from tier two into tier one.Much of the Midlands, north-west and north-east England, which are already in tier three, will remain there. It means two-thirds of England’s population will be in tier three from Saturday.Which areas are changing tiers?From 00:01 GMT Saturday 19 December:■ Bedfordshire, Buckinghamshire, Berkshire, Peterborough, the whole of Hertfordshire, Surrey (except Waverley), Hastings and Rother, Portsmouth, Gosport and Havant will move into tier three.■ Bristol and North Somerset will be moved down to tier two.■ Herefordshire will move from tier two to tier one.Labour leader Sir Keir Starmer said he was concerned the tier system was “just not strong enough to control the virus”, saying the data showed “numbers going in the wrong direction.And the news Greater Manchester would remain in tier three provoked anger from some of the area’s MPs, including Sir Graham Brady, chairman of the influential 1922 Committee of Conservative backbenchers. “The statement will be greeted with dismay in Greater Manchester where we have had severe restrictions for nine months, where in nine of the 10 boroughs rates are below the national average,” he said.The new six-week lockdown in Northern Ireland will include closing non-essential shops and close-contact services such as hair salons. Pubs, cafes and restaurants will be restricted to takeaway services.In Wales, non-essential shops will close from the end of trading on Christmas Eve, with an alert level four lockdown starting four days later.Scotland’s Covid levels and restrictions will be reviewed on Tuesday.The UK recorded a further 532 coronavirus deaths on Thursday, taking the total number of people who have died within 28 days of testing positive for the virus to 66,052. A further 35,383 cases were also recorded on Thursday, up from 25,161 on the previous day. This figure includes 11,000 positive cases from Wales that were not previously recorded in official figures due to maintenance work on Public Health Wales’ computer systems at the end of last week.SOURCE: BBC News#manchesterunited#HealthForAll#HealthBroadcastingService#GlobalHealth#Covid-19#coronavirus#Health#paulpogba#ukcoronavirus#HealthBroadcastingServiceInPublicHealthPartnership#formula1abudhabi#lakers#sheffieldunitedvsmanchesterunited#sevillavsrealmadrid#pgaeuropeantour#dollyparton#extraterrestriallife#vaccine#davidllander#katieprice#leicestercityfc#lasvegasraiders#chelseavsleedsunited#bobingen#furlough#softbank#mariasharapova#wuhanparty#juventusfc#denvernuggets#worldhealthorganisation#deathstranding#aaronrodgers#losangeleslakers #indianationalcricket#michaelschumacher #wuhanrelearnshowtopartyLikeCommentShare